The FV107 Scimitar, known as an armored reconnaissance vehicle has been in service for the United Kingdom since 1971, it is almost the same size as a WMIK Land rover and can transverse well over rough terrain as it is a tracked vehicle. The small beast is powered by a Jaguar 6 cylinder petrol /  Cummins BTA 5.9-liter diesel, engine output power is roughly around 190 hp, thus meaning it can travel 80 km/h over roads. The total weight of this vehicle is 8 tonnes, with fully loaded ammunition and when the vehicle is in combat readiness.

There is capacity for 3 crewman,  like the WMIK Land rover and has the same command structure where one is the driver, the gunner and commander, seemingly these roles are very different and the WMIK Land Rover can of course carry an extra machine gunner as for the third person who is commanding.

The main gun by default carries 165 rounds, which fire 30 mm rounds from the RARDEN cannon and can fire ‘Armour Piercing Secondary Effect’ (APSE), ‘Armour Piercing Discarding Sabot’ (APDS) and ‘High Explosive Incendiary’ (HEI), ‘High Explosive’ (HE), ‘Armour Piercing’ (AP) and the range of this cannon is 4 km. The loading of the RARDEN cannon is unlike any other belt-fed system as this gun is fed 3 round clips and can fire at a rate of 90 rounds per minute. The FV107 also has a secondary coaxial weapon which carries 3,000 7.62 mm (Maximum) rounds to which end is initially for taking down infantry and various other targets as to where the main cannon is usually used for buildings, vehicles, ‘hard targets’ and for exploding unexploded bombs.

Other features such as being able to make hot food and drink also came into the program of making the Scimitar as it features a forced air system (As with all UK armour) to which it can withstand chemical, biological, radiological or nuclear warfare known as CBRN. There is also surprisingly a toilet inside the Scimitar, where the commander is positioned to where you can actually sit down and do a number one/two. This is what makes the Scimitar versatile and comfortable for the crew of this small beast

“The vehicle’s exceptionally low ground pressure and small size make it useful where the terrain is hostile and movement difficult. Scimitar carries a 30mm Rarden cannon for self-defence. It is used by reconnaissance regiments of the Royal Armoured Corps and ‘recce’ elements of the armoured infantry.” 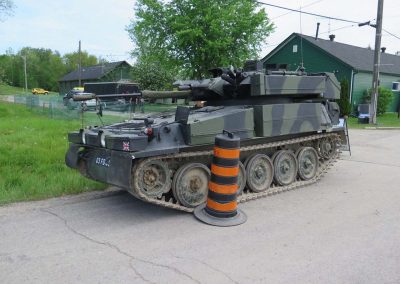 The rise of China and the issue that is Taiwan